The previous blog cleared the concept of recent apps list. As promised before, this blog explains the working of battery saver apps and cleaners such as CCleaner, NQ system,DU battery saver etc.
This article needs to be divided into two parts for android marshmallow doesn't allow third party apps to modify their system before rooting.
DU battery saver is the king of battery saver apps. This app is even pre-installed on some of the android devices. "The NGUdbhav Corp." highly discourages the use of this app. 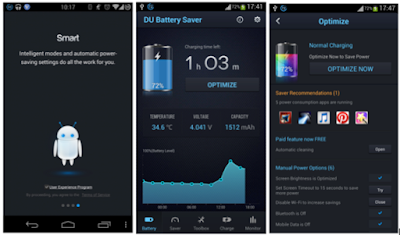 As soon as you click on Optimize button, This app terminates, more precisely, restarts the processes other than the main OS process, which results in freeing of the RAM for a moment. After a second or two, additional amount of battery and a big load on processor is used in restarting the processes. Even the detailed RAM usage is not shown correct by this app. The app which has been terminated by the ATK program of our system is also shown as running by this app. Also, this app adds itself to the startup list of the system which not only increases the boot-up time but also presents a load on the processor, adding itself to the battery usage.
CCleaner, Power Master, Clean Master, all apps also does the same thing in one or the other way. One additional feature of these apps is the clearance of the cache memory. 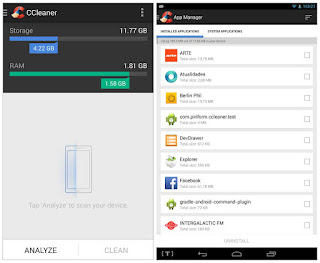 Cache memory can also be cleared manually by following these simple steps:
So why to waste the precious internal memory to do this by installing an additional application. These apps also add themselves to the auto-startup, increasing the boot-up time of the system.

Are You Really Utilizing your Internal Memory or Wasting it by installing these apps?

Comment your questions, doubts and suggestions!
Next episode will explain the relation of Viruses and Android.
Posted by NGUdbhav at 12:42:00 PM No comments: